NAWA TO HADA
(“Rope And Skin”)
Production: Japan, 1979
Director: Nishimura Shogoro
Category: Sex/Sadism
Notable as the last film starring Naomi Tani, who plays Cherry Blossom Okoma, a female gambler also giving her farewell performance – or so she thinks. It all goes wrong when she catches a local yakuza boss cheating, leading to a series of violent and bloody retributions which culminates in Okoma’s torture and a corpse-strewn finale. Revenge, murder, rape, suffering and cruelty are the film’s main themes, and the usual bondage-torture is enhanced by pubic shaving and vaginal violation with eggs and bananas. Nawa To Hada, a Nikkatsu “Roman Porno” production, borrows from several sources, primarily Furyo Anego Den: Inoshika Ocho (with Tani re-enacting that film’s bare-breasted knife-fights), plus some blood-spraying gore effects reminiscent of 70s samurai movies. A suitably downbeat and mean-spirited end to Tani’s illustrious career as a nude object of male abuse. 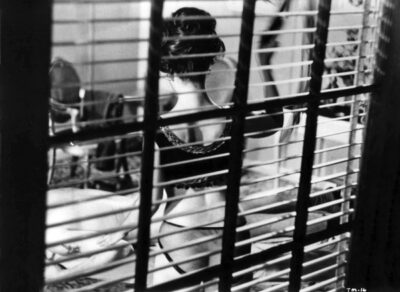